Women in Engineering, STEM Sisters (and Brothers) Around the World, Unite! #ThinkBigDiversity

My favorite meal of the day is breakfast, so it is ironic (or rather a blessing) that women from around the world have encouraged me and my work over breakfast.  Today, I reflect on a day in 2015 when I was preparing for a session in Italy. I was having breakfast and was at a table with one of the few open seats in the room. A woman comes over and asks to sit, and set a match that lit a path for a journey. A journey to  empower people around the world to use their talents to serve humanity. That woman was Dr. Sirin Tekinay, current Vice Rector of Research and Development at Sabanci University, in Istanbul, Turkey. Professor Tekinay  is an engineer, and prior to her current position, she was the Rector Işik University and Dean of Engineering and Natural Sciences at Kadir Has University, Istanbul, Turkey. As we had breakfast, and I discussed my work, she told me how important it was, and then proceeded to encourage me to continue to be a voice for women and underrepresentation in engineering. During that conference in Italy, I learned that I was going to be invited to Australia to present before a panel on diversity and inclusion in engineering. Dr. Tekinay told me that I was a leader, … and I believed her. I remember marveling and later asking God in my prayers, “Who was that woman? She just came in out of the blue and put this leader vision into my head.” We’ve always learned that God works in mysterious ways, and this was certainly one of those mysterious experiences.  The panel in Australia went well and that led to an invitation to be on a keynote panel in India … on women in engineering.  That’s where I met Prof. Dr. Khairiyah Mohd-Yusof.

Dr. Mohd-Yusof is the Director of the  Centre for Engineering Education, Universiti Teknologi Malaysia, and I’d seen her for the first time on stage when I was in Dubai in 2014, but she was just a distant icon. It had been my first trip to the east, and it was the first time that my American views on women in engineering were challenged. I met women from Asia, Indian, the UAE, and other countries, and they were strong forces … fountains of knowledge. I was in awe of Dr. Mohd-Yusof and others there in Dubai. When I went to India, I will never forget the moment over breakfast in Pune, when Dr. Mohd-Yusof told me that she liked my work, and that I should come to Malaysia. She knew my name. She liked my work. She wanted me to come to her country. I was able to go this year, and the three of us took this photo together, November 2017 at the World Engineering Education Forum in Kuala Lumpur. 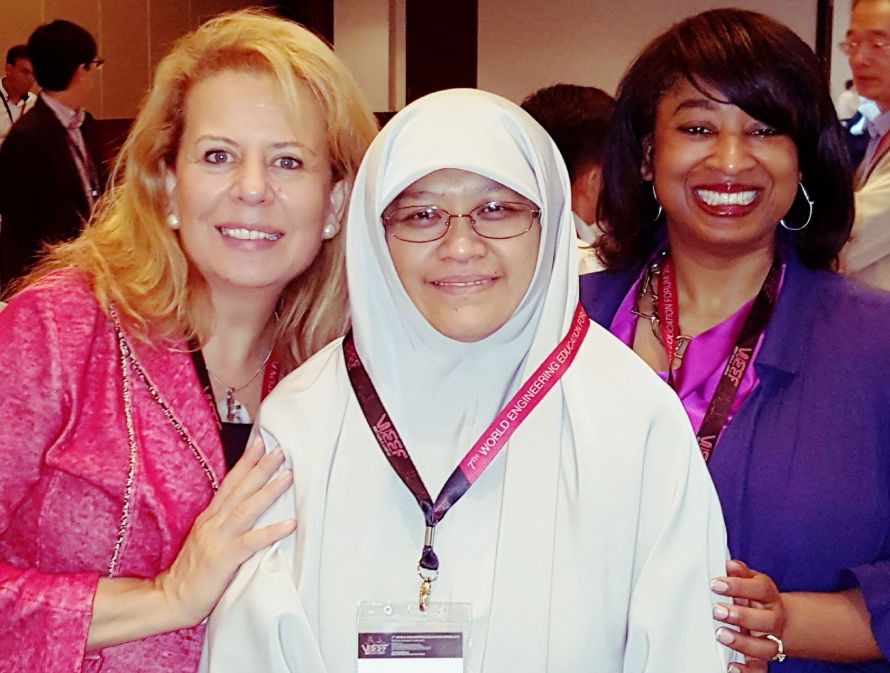 You never know who will be moved to mentor you.

There is an interesting element to this post, and that is the connection to international graduate students. I’d met students from various countries in Africa, and the Caribbean as an undergraduate at Howard University in DC, but my first experience with students from parts of the world who looked different from me came as a graduate student at Northwestern when my electrical engineering study group included students from the U.S., Germany, India, and China. We jokingly referred to ourselves as “the United Nations,” but I viewed it as a honor, and I’m sure that it has helped to shape my current perspectives on global diplomacy. As an educator who has specialized in areas of graduate education for many years, I am attentive to the needs of students who come from other countries to study in the U.S. I’ve met brilliant students, and have no doubt that I have been in the presence of future world leaders. I recently learned that both Dr. Tekinay and Dr. Mohd-Yusof received their PhDs in engineering in the U.S., and that both were very familiar with issues of inclusion and diversity in America. This means that they could have been your graduate students, or your friends in graduate school. This means that others like them could be in classes with you now, and that they will go on sow good seeds in the future. They have mentored me, and it just goes to show that mentoring can come from unexpected places.

Get rid of the “us” and “them” mentality

There have been situations in undergraduate and graduate programs when students from the U.S. and international students have been given the invisible message that there is an “us” and “them” separation. The situation can be worse for students who are from underrepresented minority groups, who can find themselves separated from both majority students from the U.S., and the international students. Engineering programs often have large numbers of students from India and China, and the invisible walls that “encourage separation” get higher and higher when there is little communication, or when others unfairly cement blocks within the walls that exaggerate the differences. We have the opportunity to change that mentality. If you are a professor, you can encourage more inclusion within your classrooms, and within your labs. If you are a student, you can make an effort to make connections. This charge is for people from all groups. So often, students from minoritized groups feel the extra pressure of trying to make the connections, but this process would be so much easier if people from all groups would consider the basics of congeniality. Can we say “hello?” If not a smile, then a nod to acknowledge one’s humanity can work wonders.

With students from SPEED, the Student Platform for Engineering Education Development, during their session for the Global Student Forum, Kuala Lumpur, Malaysia, 2017. Students here are from India and Latin America.

I’ve shared time with students (and trained faculty) in classrooms in these countries, as well as in Latin America. I know that joy and disappointment, laughter and tears, occur across ethnic groups, so we don’t have to wonder whether people have feelings or not … they do.  People from all groups get lonely, love deeply, and have hopes and dreams.  We can feel the weight of so many barriers, so please consider the importance of encouraging one another. Empowerment and encouragement can come in many forms.  Even the little comments that are filled with caring and compassion can make a day brighter. Words such as: “I appreciate your work,” “Good luck,” and “You’ll do well,” can go a long way.

Ways that people have encouraged me

Sirin and Khairiyah have continued to encourage me to speak up and speak out, and to develop pathways for broadening participation in engineering and in STEM in general. Interestingly, we have not yet been together on U.S. soil … but whether we have been in Korea, or another country, they have always shared “empowerments” with me, and they haven’t always been with words. The hugs make a difference. The waves across the room that say “come over, and sit here” make a difference. The way that they introduce me to others makes a difference. Little things make a difference, like knowing that I try to fit too many things into a minute, so they say, “Stop, take a minute, come and have a cup of coffee,” or “Go get some sleep, we’ll see you in the morning.” They compliment me whether I wear heels or flats, a dress or pants (which can be a “thing” that plagues women in STEM). They tell me what they liked about my talks, and it helps me to evaluate the strengths.

I think that one of the greatest ways that they, and other women and mentors in general, have encouraged me is to accept me for who I am, encourage me in my own “Renetta-ness,” while being subtle in the ways that they give cues for ways that I can grow.  This has come with acceptance and acknowledgements of my imperfections, but with little pieces of advice that will lead to continuous improvement. With that understanding, I’ve learned that I have to be observant, and that I have to listen. I have to listen to what is being said, and what isn’t being said. Mentors have also given me a chance to make good when a second chance is needed. I have appreciated this more and more these days because as hard as I work, I can’t make everything perfect, so sometimes I fall and have to get up again.

Let’s empower one another

Using Sirin and Khairiyah as examples, I would like to think that as scientists and engineers, we can determine to work together, empower one another, and unite to solve mutual problems. We really don’t have time to keep people out of the conversation because of race or gender or nationality. There are too many problems to solve to waste time arguing about who should and shouldn’t be included in opportunities to address challenges. Let’s accept one another’s talents … and flaws because we all have them. Let’s move forward to make a difference.  We have a world to serve. Let’s do it, together.