My husband, Dr. Damon Tull, and I  are pleased to announce that our paper with co-authors Shawnisha Hester and physicist Dr. Anthony Johnson, Dark Matters: Metaphorical Black Holes that Affect Ethnic Underrepresentation in Engineering, is now available to the public. It can be downloaded in its entirety from ResearchGate, here.

The paper was published by the American Society for Engineering Education, and discusses our view of connections between physics, social science, and STEM education. The concept started as a discussion at home while Damon and I were discussing issues such as #BlackLivesMatter (the deaths of Trayvon Martin, Eric Garner, Tamir Rice, and too many others), and ways to better quantify issues that affect underrepresented students in STEM.

Damon and I were engineering students together in graduate school at Northwestern University, and we often (well, always) talk about science and engineering at home. One day, while discussing upcoming activities for the Summer Success Institute, sponsored by the PROMISE AGEP, he mentioned that it would be great to have an equation for some of the concepts that I was about to discuss in my next presentation, e.g., teaching, learning, mentoring, focus. As a result of that conversation, I started to write an equation, with variables assigned to educational concepts.

Damon and I continued to work on “The Success Equation” and it was later published as “A Formula for Success,” by Optics and Photonics News.  Our equation used as its foundation, the “Power Equation” that Physicist, Dr. Shirley Jackson wrote for Oprah Winfrey’s Power List in “O – The Oprah Magazine” in 2009.  References to our paper have been posted by the National Centres of Competence in Research (NCCR) are a research instrument of the Swiss National Science Foundation. (Ref: Tull, R. G., and Tull, D. L. (2012, September). A Formula for Success [Full Text] . Optics and Photonic News.)

Damon and I have always been avid consumers of latest popular scientific understanding of the universe from programs such as NOVA (PBS), How the Universe Works (Discovery Channel), and the recent reboot of Cosmos: A Spacetime Odyssey (with Dr. Neil DeGrasse Tyson).  One day, Damon and I began to develop a list of physics metaphors that could be used to describe observations and outcomes from issues surrounding underrepresentation in STEM. The use of the term “dark matters” is indeed intentional. Yes, it is a double entendre, referring to both “dark matter” in physics, and the issues experienced by scholars from ethnicities with hues of dark skin that are underrepresented in STEM. However, the issues that affect students who are underrepresented, can also affect all students in general if there is little attention to the unseen elements that influence retention in STEM. Items such as developing community, attention to culture, encouragement, respect, and access to networks are among the invisible, dark matter – 95% of the “universe” that retain students in our science and engineering fields.

After working on a number of metaphors, and several figures, we settled on a select number for the paper, and for the presentation. On Monday, June 27, 2016, Damon and I took the stage together to present excerpts from the paper at the 123rd Annual Conference and Exposition of the American Society for Engineering Education (ASEE) in New Orleans, Louisiana. This was the first public presentation of the paper. Several presidents and executive directors of engineering organizations were in the audience, and the talk received great reviews. One of the graphics that was in both the presentation and the paper is shown here, and explains our view of academic black holes: 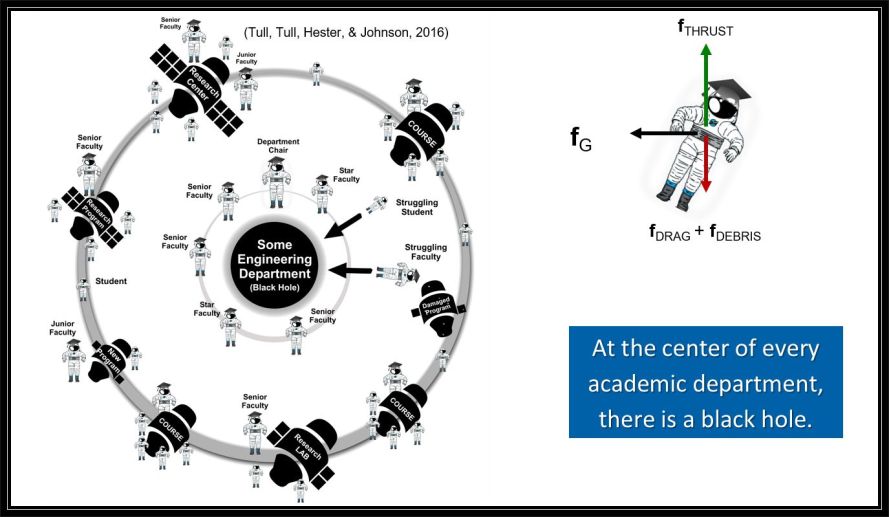 The most flattering compliments came when other presenters began to refer to issues in STEM diversity as “black holes,” and when people stopped us throughout the rest of the conference to have more discussions about “black holes” and STEM education.

We also appreciate those who let us know that they read, or are reading the paper:

Thank you so much for taking the time to read it! We really enjoyed writing it, and hope that it will have impact. https://t.co/VCEscgLWnE

To provide more information on our view of “Dark Matters Diversity,” we developed a website with some quotes from the paper, the original abstract from 2015, and links to the full text of the paper. We thank ASEE and the reviewers for publishing our work.

For more on the science of dark matter and black holes, see research discussions by two astrophysicists from the National Society of Black Physicists: Dr. Chanda Prescod-Weinstein and Dr. Jedidah Isler.