Being in the Dominican Republic and learning first-hand about issues in the island of Hispanola: Haiti + República Dominicana , all while keeping up with the aftermath of Sandra Bland’s death, the murder of Sam DuBose (Cincinnati), and the booing of Adam Goodes in Australia, makes me 1) Sad that not only are these injustices occurring left and right, but that there are people who are justifying the actions of the perpetrators, and 2) Tired. I get tired of trying to explain, but thankfully rejuvenated by others who fight the fight. In my travels, I’ve learned that racism is not relegated to the U.S. There is racism against a variety of groups in various parts of the world. I’ve seen and experienced microaggressions that are subtle, demeaning, and disrespectful ways of dealing with people. Sometimes, it is very obvious when people of one group are treated differently than another. I’ve told parts of my own story before, and the wounds become fresh again when I see other people being treated differently.  Sometimes there are situations that are connected to sexism, some that are connected to classism, and some that are just wholly disrespectful. In some cases, one might think, “Oh, that person is not being __racist/sexist/classist___, they just ___don’t like the person/do that with everyone/(fill in the blank)__________. However it is blatantly obvious that something is wrong when you witness the “alleged perpetrator of racism/sexism/classism” treat other people differently in the same situations over and over (and over again.) Then there is no denying that something is very wrong! This week, the hashtag #ILookLikeAnEngineer is one campaign that is breaking down stereotypes. My own tweet drew tremendous support, with (to date)  1,339 impressions on Twitter – including 33 favorites and some retweets, and 93 likes on Facebook.

If you’re learning about “microaggressions,” here are a couple of interesting academic and social media explanations: 1) Unmasking ‘racial micro aggressions’  http://www.apa.org/monitor/2009/02/microaggression.aspx   2) 21 Racial Microaggressions You Hear On A Daily Basis – http://www.buzzfeed.com/hnigatu/racial-microagressions-you-hear-on-a-daily-basis#.nebRlKN59

First of all, time in the Dominican Republic with my colleagues, both from the US, and abroad, has been great. I am particularly grateful for the love and support that I receive from friends, particularly from Colombia, Ecuador, Puerto Rico, and Mexico, where I’ve spent some time. The Latin and Caribbean Consortium of Engineering Institutions (LACCEI) does a lot of good, and I’m happy to be part of that organization. There is one particular incident that I must mention, because I believe that we need to bring things to light so that others don’t make the same errors.  In Santo Domingo, I witnessed differences in the way that a young Haitian engineering professor who was visiting was treated – by a person who was supposed to be assisting him. To be clear, the disrespectful action of not giving full attention to the process of translation and interpretation (the professor spoke French and English) was only committed by one person.  Trying to be fair, the person who disrespected the professor probably didn’t even realize that he had done so. (Such inconsiderate actions prompt me to think about planning more cultural competency trainings for our students at large.) At first I thought that I was the only one who noticed that this professor was being treated differently from the other speakers, then I saw that my colleague from UMBC was also fuming. I also later learned that others in the room were not happy that the professor was treated differently, and that it compromised the delivery of his presentation. However,  there were many (MANY) people who did their best to show him the utmost respect, and as one colleague stated, in the end, the message about Haiti was delivered. I especially appreciated the actions of a colleague who did something that I consider to be an act that was a combination of courage and “doing the right thing.” He stepped up and took care of the situation in a way that publicly affirmed and respected the professor, making it clear that cultural competency is imperative in a global environment.   All in all, there have been great times and opportunities to connect with new and old friends. 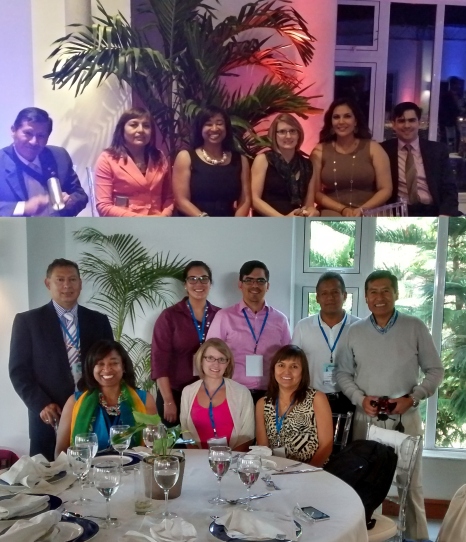 The situation that is going on with Adam Goodes in Australia has been heartbreaking. To be booed incessantly, to be referred to as an “ape” by a young girl, etc. The #IstandWithAdam campaign on Twitter is at least something that calls people to action.

#AdamGoodes – His situation raises one of the (many) reasons why we have to tackle race issues globally. #Australia http://t.co/8rn2adas9K — Renetta G. Tull (@Renetta_Tull) July 31, 2015

I’ve had several conversations with colleagues about issues facing indigenous, Aboriginal, First Australians. Yes, racism is alive and well and it’s interesting to hear how people discuss Goodes (referred to as the “blackfella” by some) is being told by some to just “man up” or “get over it” when it was announced that he was taking a leave this season (Australia Football league: http://www.bbc.com/news/world-australia-33745663). Then there was the case of the newspaper that incorrectly printed a picture of footballer Lewis Jetta (also of Aboriginal origin), with headlines calling him Adam Goodes. One blogger spoke for many when he simply tweeted, “No, No, No … That is not Adam Goodes.” Perhaps this tweet says it best:

Someone needs to tell the Australian that this is not, in fact, #AdamGoodes and #jesuswept. pic.twitter.com/NJRlABgYLy — Van Badham (@vanbadham) August 3, 2015

I’ve been interested in Australia for a while. I began to study some of the history a little bit more after I gave a talk for the 2013 International Forum of the American Society for Engineering Education, and a delegation from universities in Queensland came up to me afterward because they said that the programs that we’ve developed for PROMISE could be very helpful in Australia. Since then, I’ve had several meetings and discussions with colleagues from various parts of Australia from coast to coast, Perth to Sydney.

A bit closer to home, I’m on the board for the PNW-COSMOS AGEP-T in the Pacific Northwest, which recruits and retains Native American students in STEM, with a focus on developing and illuminating pathways to graduate school and eventually the professoriate. While at a PNW-COSMOS meeting in Montana, I not only learned from people with tribal affiliations in the US but also from indigenous people from New Zealand who were part of the leadership and research program at The Payne Family Native American Center. Gaining more knowledge about indigenous people, and struggles for rights also tied in to the history lessons that I had during the brief time that I lived in Ecuador.  There, I had a chance to learn about native Ecuadorians, e.g, Quichua people among others, traditions, politics, inequities, as well as attempts toward inclusion. I’m still learning, but I’m pleased to know that our work in Maryland is having an impact in other places.

For more on the importance of support networks and understanding cultures, see the paper with my former students:

(From the Bachelor’s degree to the Doctorate: Systems of support for graduate students in schools outside of their country and far from home.)   The title slide for the presentation that we gave in Santo Domingo is here, and the paper will be uploaded to Researchgate soon: